Skip to Main Content
It looks like you're using Internet Explorer 11 or older. This website works best with modern browsers such as the latest versions of Chrome, Firefox, Safari, and Edge. If you continue with this browser, you may see unexpected results.

This guide is meant as brief pointer to the best in Fantasy Literature for scholarly research purposes.

When preparing for a research paper or other scholarly work dealing with literature or fiction, it is imperative that you select the best works available, so you can form the most appropriate and relevant response to your topic. Start with the works and authors suggested in this research guide, but don't be afraid to branch out, either. 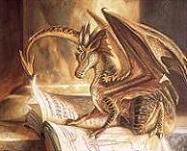 A good, quick way to identify authors that you like is to pick up an anthology. Here, you get a flash introduction to a completed work from each author (short stories, sometimes poetry), so you can decide for yourself, based on your informed academic understanding and the opinion of a respected anthology, what good fantasy literature looks like. You can also let the awards be your guide. Authors and works that have won the Locus, Nebula, Hugo, or World Fantasy Award will be extremely high quality.

Good luck, and have fun. Don't be afraid to go off on a tangent with your research. Some of the best ideas are formed that way.

A Wizard of Earthsea

Ursula K. Le Guin is one of fantasy literature's classic authors. Her Earthsea chronicles, which consist of six books, were published beginning in the 1960's and became seminal works of modern fantasy. A Wizard of Earthsea is a coming-of-age story of Ged, a young wizard boy who attempts to outsmart his nemesis by using his magic, but instead sets loose shadow from another realm.

Note: GTC Libraries do not currently hold a copy of A Wizard of Earthsea. Check your local public library.

The Locus Awards: Thirty Years of the Best in Science Fiction and Fantasy

Locus Magazine began their prestigious speculative literature Locus Awards in the early 1970's, and this anthology features 18 novelettes and short stories, all Locus Award-winning, as great works of modern fantasy and science fiction. Of particular interest are "Bears Discover Fire" by Terry Bisson, "The Way of Cross and Dragon" by George R.R. Martin, "October in the Chair" by Neil Gaiman.

Wizards is an anthology of short fiction written by "Masters of Modern Fantasy", such as Neil Gaiman, Garth Nix, Orson Scott Card. These stories will give any researcher or fantasy reader a good idea of what these authors are like. Every story in this anthology, as the title suggests, features or includes a wizard or wizardry of some sort. The list of authors in this work is very impressive, as is the anthology in general.